Emerging markets are an important part of a well-diversified global equity portfolio. However, recent history reminds us that they can be volatile and can perform differently than developed markets. In this article, we provide a longer historical perspective on the performance of emerging markets and the countries that constitute them. We also describe the emerging markets opportunity set and how it has evolved in recent years. 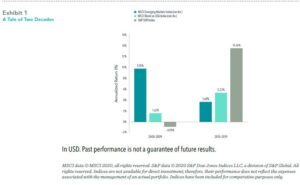 The magnitude of the return differences from year to year can be large. For example, relative to the US, the biggest underperformance in the past 10 years was in 2013, when emerging markets underperformed by over 34 percentage points. Exhibit 2 helps to put this difference into historical context: between 1988 and 2019, emerging markets outperformed US stocks by 34 percentage points or more per year four times (1993, 1999, 2007, and 2009) and underperformed US stocks by that same magnitude four times (1995, 1997, 1998, and 2013).

Over the entire period from 1988 to 2019, investors with a consistent allocation to emerging markets were rewarded. The MSCI Emerging Markets Index (gross div.) had an
annualized return of 10.7% over this period. That exceeded the 5.9% annualized return for the MSCI World ex USA Index (gross div.) and was similar to the 10.8% average annualized return for the S&P 500, even when including the recent decade of strong performance of the US equity market. However, emerging markets returns were also more volatile. Looking at the same indices, the annualized standard deviation was higher for emerging markets: 22.4% vs. 14.1% for the US and 16.4% for developed markets outside the US. This higher volatility, as well as the potentially sizable performance deviation from developed markets, underscores the importance of patience, discipline, and an appropriate allocation that investors can stick with when considering investing in emerging markets.

Diversification across emerging markets countries can improve the reliability of investment outcomes, as dispersion among country returns can be wide. Exhibit 3 displays individual emerging markets country returns by calendar year for the past two decades. Each country is represented by a different color, and countries are ranked each year from the highest to lowest performer. In the 20 years ended December 2019, no country had the worst-performing market for more than two consecutive years, and no country had the best-performing market in consecutive years. The illustration shows that country performance is volatile and that countries that rank low in one year may rank among the highest performers in the next year. 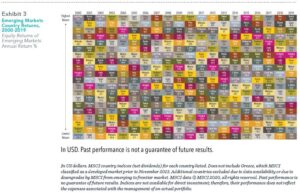 Focusing on the countries at the top and bottom of the columns for each year reveals substantial differences in returns between the best-performing and worst-performing market. Exhibit 4 shows that, over the past two decades, the annual return difference between the best- and worst-performing emerging markets has ranged from 39 percentage points in 2013 to 159 percentage points in 2005. On average, that difference has been approximately 80 percentage points per year. Perhaps somewhat counterintuitively, the extreme performers were not necessarily dominated by a handful of countries or by the smaller countries. In fact, 13 different countries were the worst annual performers, and similarly, 13 different countries were the best annual performers. These data illustrate the extreme outcomes that investors may be exposed to by concentrating in a few countries. There is no compelling evidence that investors can reliably add value through dynamic country allocation.1 By holding a broadly diversified portfolio, investors are instead well positioned to capture returns wherever they occur. 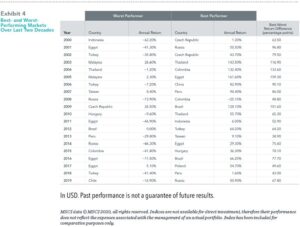 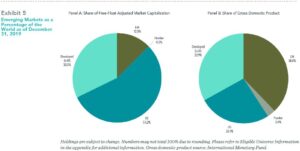 Panel A of Exhibit 6 examines the country composition of Dimensional’s emerging markets universe. The top five countries in terms of market capitalization—Brazil, China, India, Korea, and Taiwan—represented 73.2% at the end of 2019, slightly higher than at the beginning of the decade, when these same five countries represented 68.8% of the universe. A more significant development over the past decade has been the rise in the weight of China, from 17.2% of the universe at the end of 2009 to 31.4% at the end of 2019. This increase has been driven primarily by new equity issuance and new avenues for foreign investors to gain exposure to Chinese companies, including securities listed on the local Shanghai and Shenzhen stock exchanges through Hong Kong stock connect programs.

In addition to changes in size and country composition, emerging markets have undergone important improvements in their market mechanisms and microstructures over the past decade. Generally, emerging markets have become more open to foreign investors with fewer constraints on capital mobility. Evidence of these developments includes fewer instances of market closings, capital lockups, and trading suspensions of individual stocks in many markets. Finally, emerging markets have broadly adopted international accounting and reporting practices over the last decade. Our analysis suggests more than 90% of the firms in most emerging markets now report their annual financial statements according to International Financial Reporting Standards (IFRS) or US Generally Accepted Accounting Practices (GAAP). In countries like China, India, and
Taiwan, the national standards have substantially converged with IFRS. This has helped improve the reliability and transparency of financial data in emerging markets.

In sum, emerging markets represent a meaningful opportunity set within global markets. They continue to evolve in their structures, market mechanisms, and accessibility.
Investors in emerging markets can benefit from a long-term perspective, expertise and flexibility in navigating these changing markets, and an approach that emphasizes diversification and discipline.

Sources: Dimensional Fund Advisors LP is an investment advisor registered with the Securities and Exchange Commission.